Write about your Evanescence dreams here!

Okay, my first dream about Evanescence was when I’m 16 in 2004. I dreamed that I went to the United States to watch them live and I met the whole band in a dressing room including my favorite idol Amy Lee. I just don’t know how I got there, but Amy showed me her favorite skirts that she often wears on stage. I was totally amazed by my dream and I woke up very happy in the morning. My second dream was in 2006, this time Amy Lee went to my country in The Philippines and I met her again and we chat. She was wearing the black dress she wore in VMA’s 2006. I just couldn’t remember what we’re talking about. The next thing happened was we were riding a jeep (a public vehicle in the Philippines) together, and I asked her to take a picture and she said yes, but later on I dropped my camera and shattered in the highway, too bad though. And in year 2012 she came to my country for real.

I met her in person, and had a solo picture with her, we hugged each other

and I told her she’s incredibly beautiful. I recalled my dreams in the past and felt teary eyed after I met her that day and it feels great and I know I will never forget it for the rest of my life. 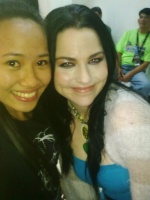